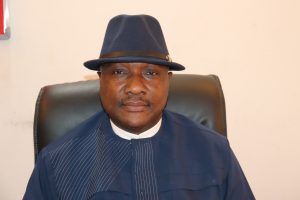 Moses Wambebe Jo- Madugu was born on the 15th of August  1967 in Ilorin,Kwara State.

He attended  the University  of Jos,Plateau  State,where he graduated with a B.sc(Hons) Degree in Political Science in 1989.

He joined the Federal  Civil Service in the defunct  Ministry  of Federal  Capital  Territory ( MFCT)in 1990 as Cooperative  Officer 11 and subsequently  converted to a Personnel  Officer 11.

He served four (4) Hon . Minister’s of State,FCT in various Administrative capacities handling  Administration and Area Councils schedule where he used his theoretical experience  of Political Science to bear on the practical forum of Area Council Administration.

With MFCT becoming defunct,he was posted to the Federal  Ministry  of Industry,Trade and Investment where he served in the Appointment, Promotion and Discipline Division in the Administration Department and eventually  Protocol.He  served 6 Honourable  Minister’s in Administrative  and Protocol schedules and also represented the Ministry  on the Council of the Federal  Poytechnic,Bauchi.

He was promoted to the rank of Director in January  2020 and posted as Director ,Reform  Coordination and Service Improvement in April 2022 to the Federal  Ministry  of Water  Resources  where he hopes  to to put his years of experience  to bear in operationalizing the Reform and Service Delivery Objectives of the Federal  Government  in general  and the Ministry in particular.