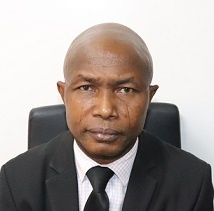 After the Higher School Certificate Course at the Osogbo Grammar School, I proceeded to read Law at the University of Lagos, between 1987-1990 for my LL.B (Hons.)

Thereafter, I attended the Nigerian Law School then in Lagos between 1990-1991 and called to the Bar in 1991, after having obtained B.L

I started my career in the Civil Service in 1992 as a Legal Officer II and rose to become a Director (Legal) in 2017. Between 1992 till date, I have worked as a State Counsel in the following offices:

1.Department of Public Prosecutions of the Federation, Federal Ministry of Justice;

Awarded Honorary Fellowship (FCAI) of the Institute of Corporate Administration.