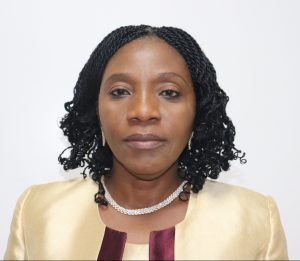 After the completion of the mandatory Youth service in Kano, she worked briefly at Aunty-Ayo Preparatory School Ikoyi, Lagos as a Guidance Counselor and Teacher, a position she resigned to start her career with the Federal Civil Service in 1990 as Personnel Officer II, GL 08.

In the course of her career in service, she has attended several courses and trainings in Administration, Budgeting, Management, Leadership, Procurement and Security both within and outside the Country.

She was promoted to the rank of Director (Administration), GL 17 with effect from 1st January, 2017.

She is currently, the Director (Human Resource Management) in the Ministry of Water Resources.

She is happily married with children.  She loves Children/Youth Development, organizing events, charity works and reading.