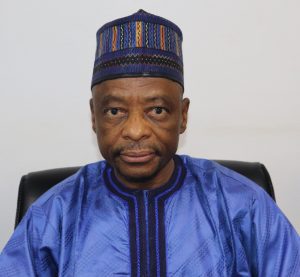 Engr Ali Ibrahim DALLAH was born on 16th February, 1967 to the family of Alhaji and Mrs Ibrahim Ali Dallah. He attended Dunama Primary School, Lafia from 19973 to 1979 and came out on top of the class. Immediately after passing out from the Primary School he proceeded to Government Secondary School, Obi where he came out triumphantly as the best student. He then went to then University of Jos and later University of Agriculture, Makurdi to study Civil Engineering. Ali Ibrahim Dallah graduated with Bachelor of Engineering Degree, B.Eng.(Hon) in 1991 and later obtained a Masters Degree from the University of Dar es Salaam, Dar es Salaam in Tanzania in 2001.

He joined Federal Ministry of Water Resources on 9th November, 1993 and posted to the Department of Dams and Reservoir Operations the same year and remained in the Department since then except for a stint outside the Country from 1999 to 2021 for study when he obtained an M.Sc degree in Water Resources Engineering from the University of Dar es Salaam, Tanzania. Engr. A. I. Dallah also spent 2 years in the Republic of Seychelles under the Technical Aid Corps in the Ministry of National Planning as a Quality Engineer responsible for checking structural Designs and Drawings.

Engr. Dallah worked in different project sites for the Ministry as Civil Engineer and Project Manager. He was posted to Gurara dam project in 2001 to acquire field experience and spent 7years there. He was also posted by the Ministry to Hadejia-Jamaare  River Basin Authority where he designed irrigation canals and supervised construction in Katagum Irrigation Project under the suprervision of Engr. Yahaya Dalha Kazaure.

During his M.Sc Programme, Ali Ibrahim Dallah undertook a research on Nitrogen Removal by water Hyacinth in a Constructed wetland. The outcome of the research provided a guide that would keep our  rivers reasonably free from pollutants coming from industrial effluents or waste stabilization ponds or as the case may be.

Engr. Dallah was promoted to the rank of Director in November, 2021 and redeployed as Director of Dams and Reservoir Operations in February, 2022.

Engr. Ali Ibrahim Dallah is married and blessed with Children.