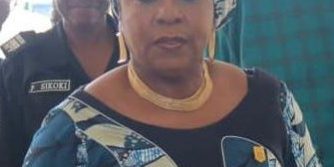 Represented by the Permanent Secretary.

The Honourable Minister of Water Resources, Engr Suleiman H Adamu, FNSE,FAEng has reiterated the importance of irrigation and food security in the socio economic development and poverty reduction in Nigeria.

The Honourable Minister who was represented by the Permanent Secretary of the Ministry, Mrs Didi Walson-Jack mni, made this assertion at the South West Regional Workshop on the Establishment and Strengthening of Water Users Associations (WUAs) for the Management of Public Irrigation Schemes, with Middle Ogun Irrigation Project as Case Study, holding at the University of Ibadan Conference Hall, from Wednesday 1st to Friday 3rd June,2022.

Engr Adamu recalled that at the inception of this administration, the Federal Government accorded the Water Sector, particularly irrigation, a priority status in the socio- economic development of the country in meeting the Cardinal programme of the government in the areas of poverty reduction, integrated rural development, employment generation, good environment management, and food security respectively.

He reiterated Federal Government’s commitment to massively invest in irrigation Sub- Sector to make Nigeria food and water secured by moving from Drought -Prone, Rain -Fed Agriculture, to Irrigated Agriculture for self sufficiency and poverty reduction.

Also in her opening remarks, the Permanent Secretary Mrs Didi Walson-Jack mni who was represented by the Director General Services, Mr Kayode Adamson noted that the Regional Workshop is a veritable platform to address the current Irrigation Sub-sector challenges by proffering all-inclusive measures to ensure that all the Farmers in the States and Local Government Areas are fully integrated and involved in the adoption and operationalization of Water User’s Associations (WUAs) to increase Private Sector participation and investments in the Irrigation Sub-Sector.

She added with optimism that the effort will promote healthy competition in irrigated agriculture for National Food Security and Sustainable National Development.

In her remarks, the Director of Irrigation and Drainage, Federal Ministry of Water Resources Engr Oyeronke Oluniyi pointed out that the Federal Government had earlier introduced the concept of Participatory Irrigation Management (PIM) to ensure the involvement of farmers in Irrigation Schemes , stressing that the proceeds of PIM was the Establishment of well structured Water Users Associations (WUAs) at the Scheme levels with the resultant Irrigation Institutional and Management framework being propagated by the Transforming Irrigation Management in Nigeria ( TRIMMING) Project.

Participants at the Workshop were Government Officials, members of the Academia, Irrigation Stakeholders, Traditional Rulers, Farmers, Young Professionals Forum and Country Representatives among others