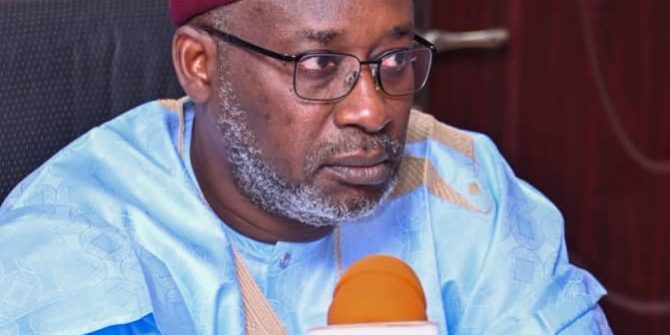 The Honourable Minister of Water Resources and the Chairman, Council of Ministers, Lake Chad Basin Commission (LCBC), Engr. Suleiman Adamu FNSE, FAEng. has stated that the time to reinvigorate and strengthen regional cooperation among Countries in the Lake Chad Basin for sustained peace, stability, and prosperity is now.

Engr. Adamu made this known at the First Annual International Forum  on the development of Lake Chad region with the theme “Lake Chad Basin: Climate Change, Security, Resilience and Development Recovery” held on Monday, 11th April 2022 in Abuja.

He stressed that multiple threats facing Lake Chad region’s common heritage such as climate change impacts, volatile insecurity, endemic poverty, health pandemics, are not country-specific but are transboundary in nature.

The Chariman, LCBC, stated that the theme of the Meeting was apt as it focused on the crucial issues facing the Lake Chad Basin Region and should serve as an opportunity for eminent scientists and researchers to reflect on the existing proposals for the revitalisation of the Lake Chad, which has been shrinking progressively for the past fifty years.

He explained that the event was a unique opportunity to facilitate science – policy dialogue as it brings together experts from the academics and research institutions in the Lake Chad Basin, to discuss and dialogue with practitioners from planners and civil society, who play key roles in addressing the complex challenges in the region.

He stated that this Strategy which was adopted by all four Lake Chad Region member states in August 2018 has made it possible for LCBC to mobilise resources to support its member states to realise their short- and medium-term stabilization and development priorities, as well as ensure cooperation and synergy between projects and programmes of multiple stakeholders working in the region.

Speaking further, Engr. Adamu noted that regional cooperation and integration is about finding regional solutions to regional problems, synergizing and not duplicating actions, as well as making progress on access to education, livelihoods and services for vulnerable groups such as youth and women, peace and security and most importantly, member countries & their common future.