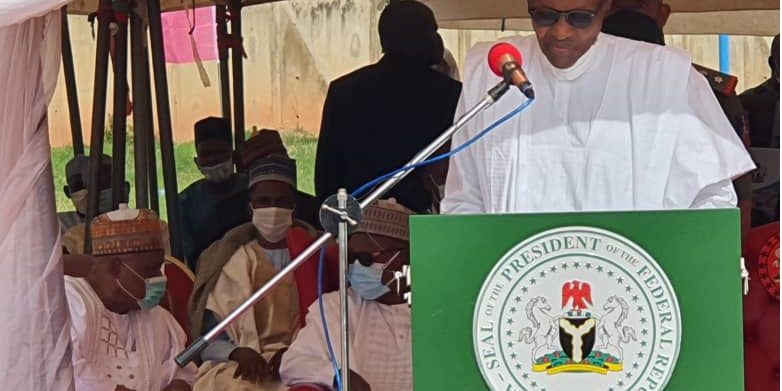 President Muhammadu Buhari has stated that his administration will continue to place priority on infrastructure development including those for Water Supply, Sanitation and Hygiene towards ensuring better living condition for Nigerians.

The President noted that access to adequate water supply, sanitation and hygiene (WASH) are part of the indices for economic development of any nation. Speaking further, Mr President  commended the positive transformation that is currently taking place in the Water and Sanitation Sector which is targeted at meeting the national aspiration of providing potable water to all Nigerians.

In his address at the commissioning ceremony, the Minister of Water Resources, Engr. Suleiman H. Adamu FNSE, FAEng informed that the execution of the Zobe Regional Water Supply Scheme suffered serious setback for over 25 years as the contract was first awarded in 1992 but got stalled at 45% completion due to neglect and lack of budget support until the advent of this administration.

Zobe Water Supply Scheme Engr. Adamu stated draws water from the Zobe Multipurpose Dam that was commissioned in 1983 with a reservoir capacity of 177 billion liters. The Scheme has been completed to the highest level of quality and has a total design capacity of 75 million liters per day to serve an estimated population of over 1,000,000 people resident in Katsina town and 7 outlaying communities namely:  Kankia, Kurfi, Kafin – Soli, Karofi, Radda, Charanchi and BindawaDanmusa. The quality of the treated water from the scheme has been subjected to laboratory testing and found to be acceptable within the national and international standards for drinking water.

The Minister emphasized that Federal Government’s intervention in water supply is meant to accelerate access to potable water and where such intervention on water facility has been completed, the usual practice is for it to be handed over to the State Government, Local Government or Community for operation and maintenance depending on the nature and size of the facility and it is therefore the turn of Zobe Regional Water Supply Scheme to be formally commissioned and handed over to Katsina State Government.

Executive Governor of Katsina State, His Excellency, Rt. Aminu Bello Masari stated that the commissioning of the gigantic Water Supply Project by President Buhari led administration in a post COVID – 19 era is quite commendable and a demonstration of the determination of the administration to address the issue of perennial water shortage in Katsina State and other parts of the country.

In his Royal Blessing, the Emir of Katsina, His Highness Alhaji Abdulmumini Kabir Usman thanked God for the eventual completion and commissioning of the Zobe Water Supply Scheme irrespective of many years of abandonment and prayed that it will be source of joy, happiness and progress to all the Water Users.